This post presents a technique for defining more reusable OCaml signatures, helping to maintain consistent APIs with minimal boilerplate. We'll work through a few examples, which you can check out on GitHub.

Consider the following definition of an iter function for some container type t:

iter requires only that t comes with functions get and length. Many useful operations can be derived in terms of such indexing functions. To take advantage of this, let's move iter into a functor and provide some other useful operations too:

For many types, including array, the get-based definitions are identical to their hand-optimised equivalents (modulo functor application). We can imagine avoiding a lot of standard-library boilerplate – and potential for API inconsistency – by using many such functors 1. We'd end up defining exactly one iter function that suffices for all Indexable types.

All good so far. Now, let's consider the string type.

A string is also an indexable container with length and get functions, albeit one that can only contain char values. It's natural to expect to be able to re-use Foldable_of_indexable1 in some way: indeed, our definition of iter above is exactly equal to the one in Stdlib.String.iter. Unfortunately, our Indexable1 module type can only describe parametric containers:

We're unable to tell the type system something like

as part of our substitution. This means that many types – including string, bytes, unboxed arrays and unboxed vectors – can't benefit from our Foldable_of_iterable1 definitions, even though their own definitions will be identical!

When we wrapped our code in the Foldable_of_indexable1 functor, we needed to give it specific input and output module types, and the ones we picked artificially limited its usefulness. This is a hazard of functorising highly-generic code. As ever, we could solve the problem with copy-paste: a new Indexable0 module type for non-parametric containers, and a new functor Foldable_of_indexable0 with exactly the same implementations as our previous one.

This definition suffers from the dual problem when we try to apply it to parameterised containers like 'a array:

This time, we wanted to be able to say something like

which is even more nonsensical than our previous attempt. Neither Indexable0 nor Indexable1 can be expressed in terms of the other. We need something more general.

Interestingly, it's possible to generalise Indexable0 and Indexable1 with another layer of indirection by making elt a type operator:

Now we can define a single Foldable_of_indexableN functor (with exactly the same implementations as before), and it will work for polymorphic and monomorphic containers. Neat!

In the general case, when you notice that different signatures are sharing common functions, it's often possible to unify them under a common interface with the following two steps:

The truly magical part of this trick is that – with better support for destructive type substitutions recently added to Odoc – it can be made completely invisible2 in documentation!

One unavoidable limitation is in what sort of operations we can put in the Foldable_of_indexable functor. Suppose our initial attempt at generalising containers included a sum function:

sum requires a container that can hold int values, which is clearly not possible for strings as the type system will happily tell us:

To state the obvious, we can't rely on parametricity in our container functions if we want them to work on non-parametric containers. The natural solution here would be to define such parametric-only functions in a separate functor.

Indexable containers aren't the only example of generalised signatures in the real world. Indeed, many other data-structures and design patterns have APIs that can be unified in this way. Consider the case of hashtables, which have a huge space of possible implementations:

Initially, it looks like these different hashtables will each require their own hand-written signature (and this is what the standard library does with its hashtables). However, with enough type parameters, these different implementations can all be unified under a single Hashtbl_generalised module type:

We can then implement our different hashtable signatures as specialisations:

For instance, for the regular polymorphic hashtable:

The other specialisations are very similar (see here for the specifics).

What is it that makes Hashtable_generalised a good parent interface for these four flavours of hashtable? To get some insight, we can notice that each of the type parameters ('k, 'v, and 'a) connects its own pair of types: 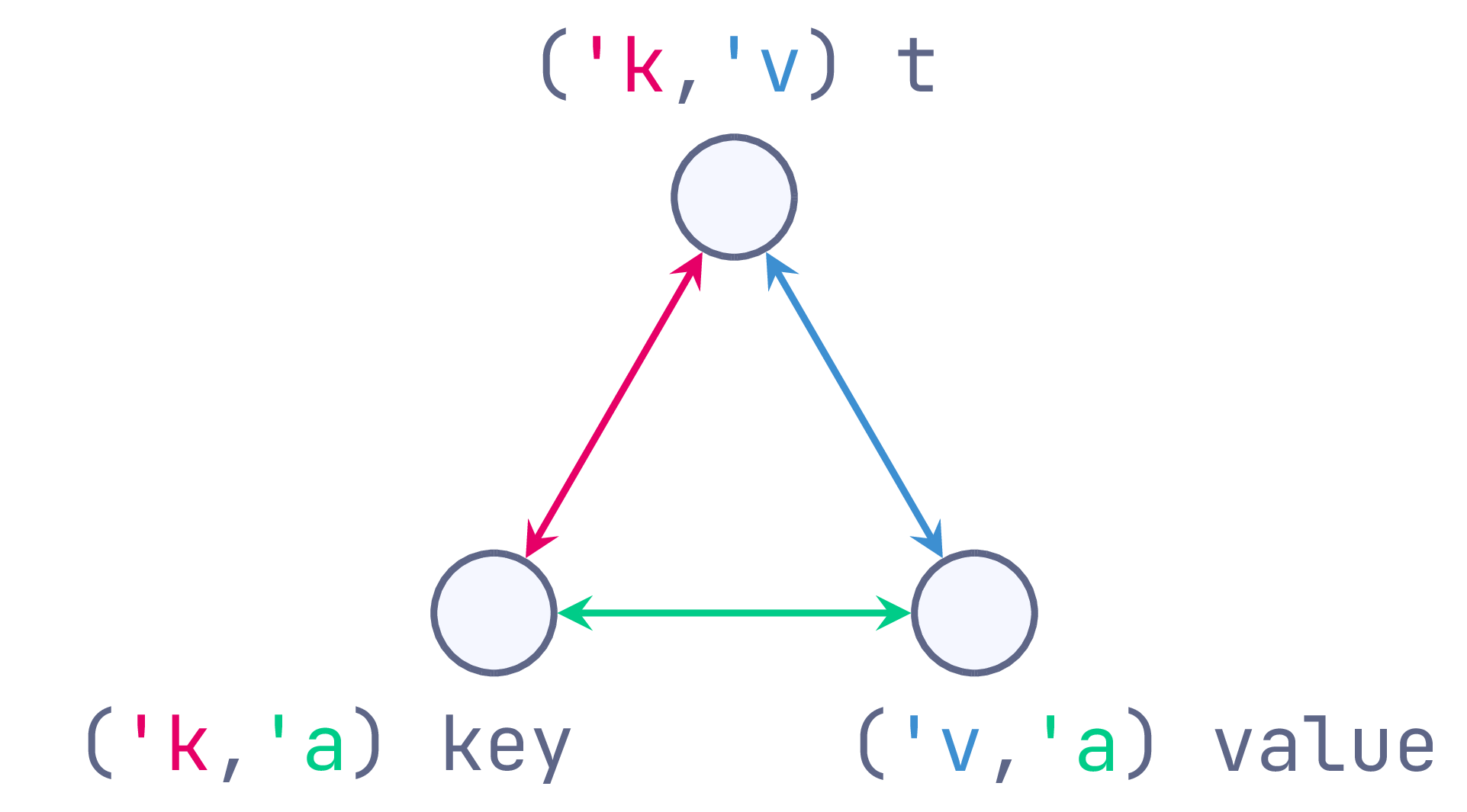 Framed this way, the type parameter 'k exists solely to carry type information between hashtables and their keys (using a type equality at call sites). Similarly, 'v bridges between hashtables and values, and 'a between keys and values. From here, each of our hashtable variants uses destructive subsitution (:=) to prune away unnecessary bridges and express some sort of dependency relation between the types:

In this case, it's not feasible for all these data structures to share the same implementation, but it's still valuable for them to implement a common core API: it ensures consistency of the user-facing functions, allows sharing of documentation, and may even allow these implementations to share a common test suite.

The full code for our Indexable and Hashtbl examples, including explicit definitions of each of the module types, can be found in the generalised-signatures repository. This repository also contains and a third demonstration of this technique being used to express monad-like signatures. The auto-generated documentation for these examples can be viewed online.

Thanks for making it to the end; I hope you picked up something useful. If you think it would help others in your network, I'd appreciate it if you shared it with them.

Appendix A: Haskell suffers too

The typeclasses in Haskell's base have the same "polymorphic-instances-only" property as our Indexable1 signature (unsurprising, since it doesn't provide any unboxed container types).

A similar trick can be performed there to generalise the typeclass instances for monomorphic containers like Text:

As in the OCaml version, we use an Elt type operator to carry the equality needed for the monomorphic case. This time we used type families to specify the relations explicitly, but we could have used multi-parameter type classes for something more akin to the OCaml functor implementation. See the mono-traversable package for more of this sort of trickery in Haskell.